How Did the Romans Do It?

If you look up the history of the toilet, then you will discover a man by the name of Sir John Harington. He was a godson of Queen Elizabeth I and was the first to create a cistern that used water to 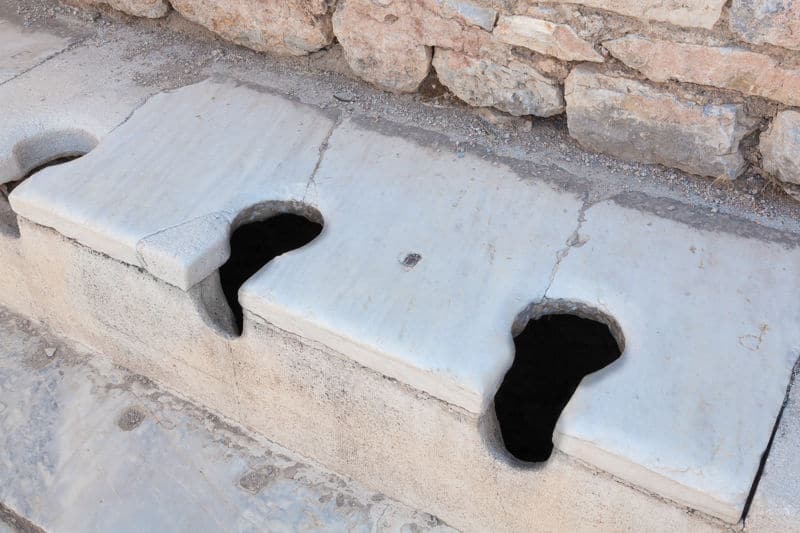 flush waste away. He even noted that 20 people could use his toilet before needing to flush it when water was scarce.

If you want to really go back into history, many of the innovations that would eventually lead to our current technologies had their foundation in the Roman Empire. Their toilets, bathhouses, and sewers were extremely innovative at their time.

With the lead in their plumbing and other indoor improvements, sanitation was a top priority for the Roman Empire. It just never made it to an effective level. You could still get roundworm, whipworm, or worse from their public toilets.

Most People in Rome Had Private Toilets

Research at ancient Roman villas shows most people had a private toilet at their home. What they were afraid to do was connect them to the local sewers. There seemed to be a legitimate fear that someone would crawl up the toilet pipes to rob their house.

The Romans also had issues with mephitic gas fires in their sewers that offered the potential to literally catch your butt on fire if they floated upward through the pipe.

Those fears are quite interesting considering the fact that the public toilets in Rome shared a sponge on a stick that everyone shared to clean themselves. Talk about passing a hot potato around a room!

Why Did the Romans Fail to Improve Sanitation?

For all of the amazing technological accomplishments that the Roman Empire brought to the world over its centuries of rule, it failed to provide a legitimate improvement in sanitation. Why couldn’t they wrap their minds around this issue?

A look at the writings of doctors found during this era can shine some light on that fact. Prominent physicians, including those that would treat the emperors of Rome, documented intestinal worms that they thought originated from inside of the body. If the parasites were coming from within instead of without, then there was no reason to look at outside issues as a way to improve health.

Romans didn’t understand how infections worked either. Assuming that they built the best toilets in the world to improve sanitation is far-fetched at best. These structures were likely invented as a place of convenience, to improve odors, and to stop someone from dumping a full pot every morning.

Thankfully, we don’t need to sit on stone toilet seats anymore. We have gotten past the idea of passing a sponge around on a stick. As we continue to look at the science behind the toilet, in whatever form your culture prefers, it is evident that we have discovered that a clean bathroom can help lead us closer to safe living.