How to Adjust Toilet Float?

Also known as a ballcock or a float valve, the toilet float is a device that looks like a small plastic pipe with a plastic screw attached to it. The main function of the float is to maintain the water level in the tank so that it doesn’t overflow and make sure your tank gets refilled after each flush. You can even call it the pièce de résistance of your toilet! 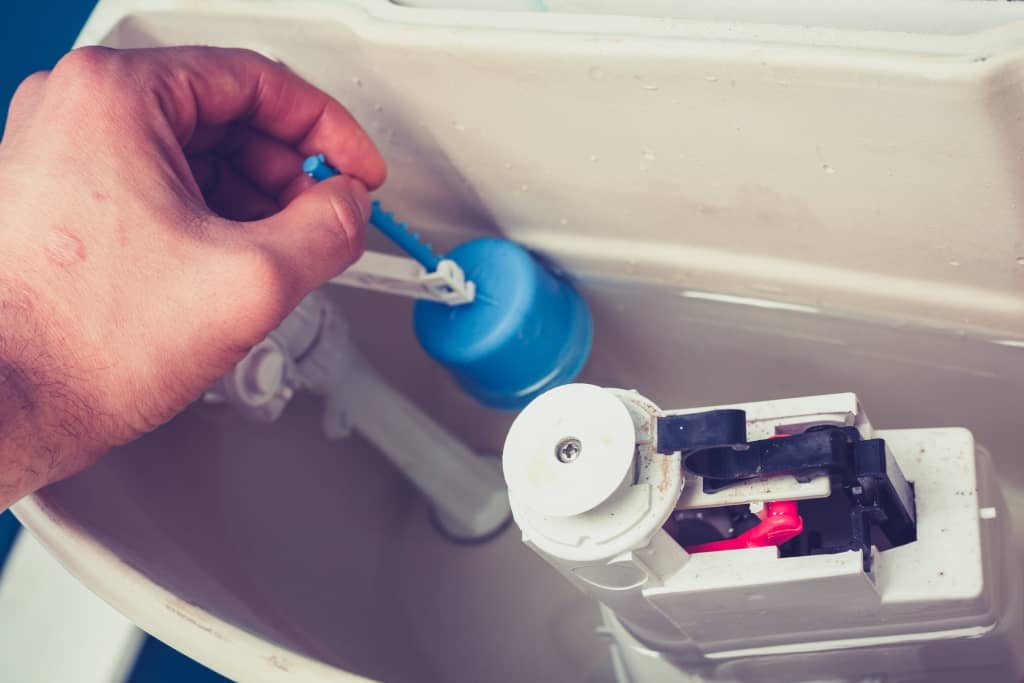 So, if you want to make sure your toilet flushes smoothly, you should know how to readjust its floating device. It will save you some coins too! Keep reading to learn all about toilet floats and how to work them around!

How Does a Toilet Actually Flush?

Even though the earliest use of toilets dates back to the 16th century, the toilets we now know were introduced around the 1920s. For the first time ever, toilets had refillable tanks and flushes that only used several gallons of water. (Water bills were definitely not an issue back then!)

The logic is brilliantly simple: the water stored in the tank moves downwards with the help of a very straightforward mechanism that utilizes its gravitational inclination to flush away the contents to the drain it’s connected to.

What Are Toilet Valves?

It wouldn’t be an understatement to say that the valve is the most critical mechanism of the toilet. What the valve actually does is release the water from the tank in the toilet bowl when you press the flush, and it automatically fills the tank again.

Knowing how these valves function may be critical in order to identify the problem and adjust your toilet float.

The piston ballcock valve usually has a brass or plastic ball attached to the rod. The ball itself looks like a rusty Christmas tree decoration you forgot in a box in the attic. But you definitely don’t want to forget your toilet’s most purposeful ornament!

As the rod moves up and down when you pull the flush lever, it triggers the ballcock that starts or stops the flow of water in the tank. This method is not that common anymore, and you probably won’t find it in newer toilet models, but the ones that do have the ballcock valve are very sturdy and durable.

Directions: To adjust the float, press on the wire that connects the ballcock to the rod. You will see that by doing so you can adjust the water level. When the water reaches the desired height, let go of the wire. Make sure that your tank does not overflow.

How to Adjust the Toilet Float of a Diaphragm Valve?

The diaphragm valve is similar in function and style to the ballcock, but instead of a ball, there is a rode and a bonnet. With these valves, you need to locate a screw-like tube called the float rod adjustment screw. This screw manages the water level by relieving or creating tension in the valve.

Directions: To adjust the diaphragm valve, simply screw the float rod adjustment screw clockwise to allow the water level to rise. If you screw it counter-clockwise, the rod will relieve some of the water in the tank and block more water from coming in. Et voila! Float adjusted!

How to Adjust the Toilet Float of an Internal Float Valve?

Directions: Unlock the valve by screwing the head. In order to fill the tank, you need to lift the headpiece. Be mindful of the waterline. Likewise, you can decrease the amount of water in the tank by pressing down on it.

How to Adjust the Toilet Float of a Float Cup Valve?

The float cup valve is a plastic float-like cylinder that moves up and down simultaneously with the flush handle. These are categorized as floatless valves because, unlike the other two, they don’t have an extra ball or a rod. Instead, the device required to float is built-in with the valve itself.

Directions: Similarly to the diaphragm valve, you need to find the float rod adjustment screw. Screwing it clockwise will allow you to raise the water level, and vice versa – you can decrease the amount of water inside the tank by screwing it counter-clockwise. Make sure to recognize the water line inside the tank!

How to Adjust the Toilet Float of Pressure Sensitive Valves?

Pressure-sensitive valves are also floatless but they are floatless because they have a separate mechanism located underwater. This mechanism is able to sense the water level based on the pressure inside the tank.

Directions: Just like the previous two, this valve also has a float rod adjustment screw that should be used to adjust the water level in the tank.

Why Should You Learn How to Adjust a Toilet Float?

After reading about the different kinds of valves, maybe you found yourself asking: “Why should I learn how to adjust a toilet float?” Here are four very solid reasons why:

The Bottom Line (Is This a Toilet Pun?)

Adjusting the toilet float is fairly simple if you know which steps to follow. Knowing how to locate the valve and when to step in to prevent any damage to the toilet itself will save you a lot of time and money. Not to mention a new toilet! If you need any further information about the toilet float valves, you may check out this video that shows how to adjust your toilet float step by step.

Now put those gloves on and lift that tank! You can do this!