What Happens When You Poop on a Plane?

What really happens when you go to use the toilet on an airplane?

You can find several disclaimers waiting for you in the bathroom of the plane. The best warning might be the one that is either on the toilet or place right above it: do not flush while seated.

No one wants to get sucked into a toilet, much less one that is flying at 30,000 feet. 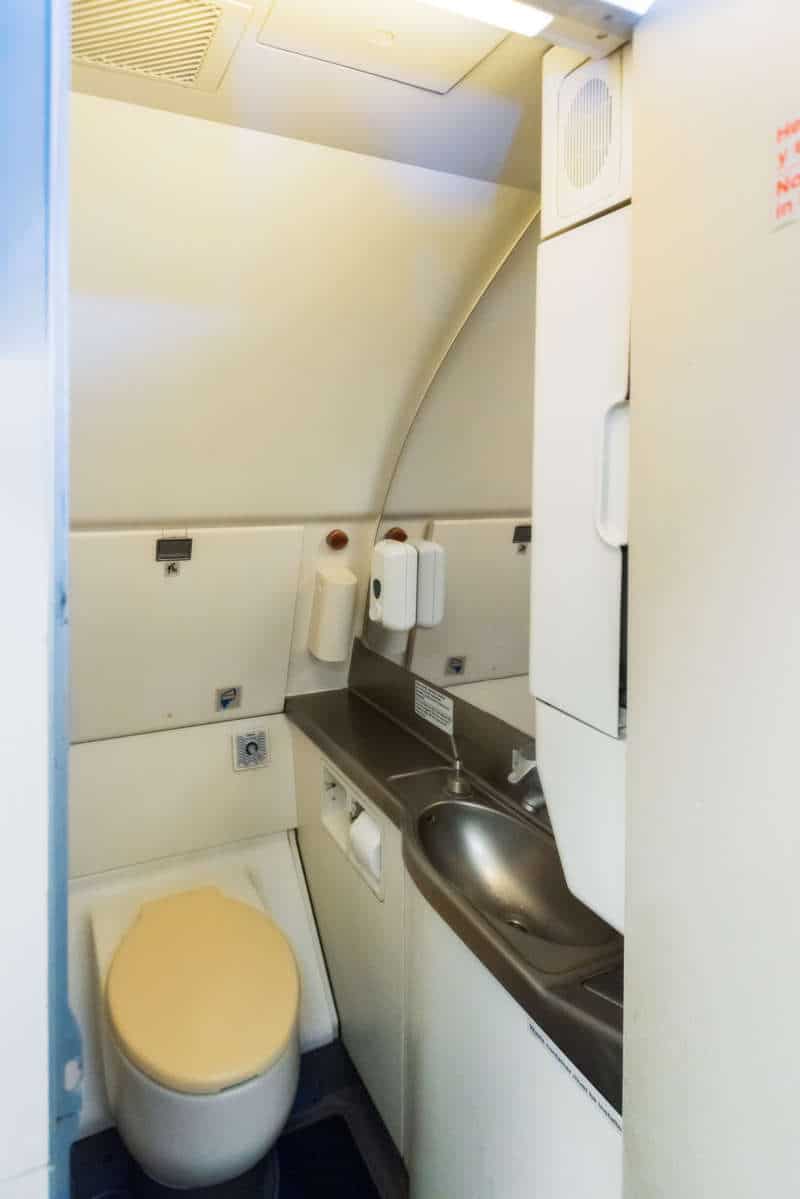 These are the answers to the questions you may have about going to the bathroom while flying on mile high that aren’t always easy to ask.

Question 1: Why is toilet water blue on airplanes?
What you see in an airplane toilet isn’t really water. It is a blue sanitizing liquid. For those who work ramp crew for airlines, it is sometimes referred to as “blue juice.” This stuff helps to reduce the number of germs that are in the waste you leave behind. If you’re into sniffing random things, then you’ll discover that this liquid can also reduce the odors of waste which occur when it mingles together for a long time.

Question 2: Where does all the icky stuff go?
When you flush a toilet on an airplane, everything goes into a holding tank that is serviced through a valve that is accessible from the exterior of the craft. Crew members will suck out the tank after the plane lands, and then replace the blue sanitizing liquid again before the next flight leaves.

Question 3: Can I get sucked into an airplane toilet?
You really can’t get sucked into an airplane toilet – not all the way, at least. Your bottom parts can create a suction point that will make it a challenge to get off the seat if you flush it without getting up first. Imagine a giant hickey on your butt that lasts for three days. That’s the consequence of not following this warning.

Question 4: Does waste get ejected from an airplane while in flight?
Despite humorous movie incidents that suggest otherwise, an airplane cannot jettison the waste tank. Even if the plane needs to lose weight because of an emergency during the flight, the waste and sanitizing liquid will stay with the craft. This function is not built into the craft. If the tank leaks, however, you can find frozen blue poop icicles falling from the sky sometimes.

Question 5: Why are airplane toilets so small?
This issue deals with the practicality of cramming hundreds of people onto a single vehicle for transportation purposes. Airlines want to maximize seating while minimizing unusable space. Reducing the size of the bathroom helps them to do just that. You’ll get enough room to move around, but that is about it.

If you have ever flown in a plane, there’s an excellent chance that you have joined the mile-high flush club already. Remember to heed the warnings, lock the door, and you’ll have a safe experience.

Airplane toilets can be some of the most compact and uncomfortable, if you’re in the market for a new toilet and want to avoid the often-disaster that is an airplane bathroom, check out our buying guide here.