You often see vault toilets or waterless toilets at campgrounds or similar public space areas. They are considered one of the most environmentally friendly toilets as they don’t use any energy and don’t leave a carbon footprint when operating. The main selling point and advantage of these toilets is the amount of water they need to operate or, to be more precise, the lack of water requirements.

If they are set up correctly, vault toilets can be easy and pleasant to use. They are easy to set up and smooth to operate. The thing that makes vault toilets a bit of a hassle is the matter of waste management but more on that later. For now, keep reading to find out more. 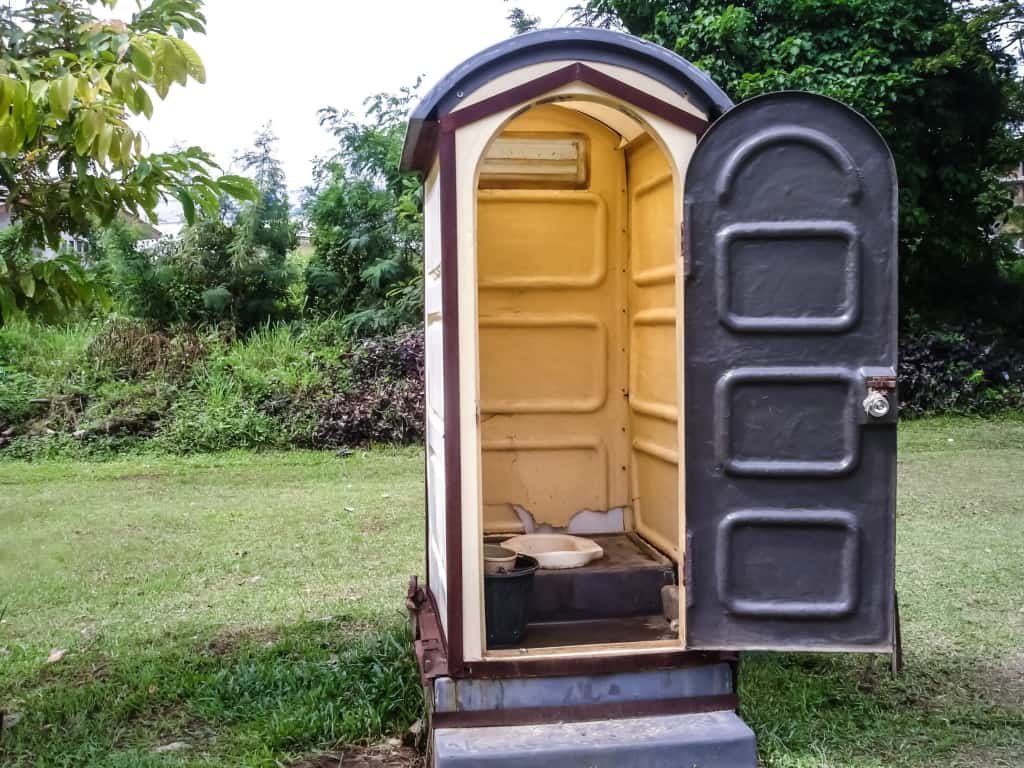 What Are Vault Toilets

Vault toilets are toilets that don’t need water to operate since they don’t have a flushing mechanism. Instead, vault toilets have an airtight vault or container that holds all the waste dumped by the users. The vault is most commonly installed under the toilet and needs to be emptied on a regular basis.

The “vault” in the vault toilet is the airtight container. Since the toilet doesn’t need running water or electricity, they are placed on camping grounds, public picnic spots, parks, and other recreational areas without a sewer line connection.

The first vault toilets were designed and implemented by the U.S. Forest Service for outdoor use to reduce the dependency on regular flushable toilets. Their invention was well received; vault toilets are standardized and approved by ADA standards.

The toilets themselves are easy to assemble and mount and can be constructed with a wide range of materials, including wood, metal, plastic cross-linked polyethylene, reinforced concrete, and regular old plywood. They are most commonly made from polyethylene and plastic. They are quite durable installations.

Vault toilets are very eco-friendly as they pose a minimal risk for pollution since they are created from materials that won’t crack on their own. Moreover, their plastic variants are very easy to transport and easy to construct.

How Do They Work?

Standard vault toilets are made from two separate components – the vault or container, which is placed underground, and the cabin part, which acts as a privacy booth. The toilets are unisex, meaning all genders can use them without issue. They can be mounted on short notice for public events or gatherings. The toilet vault usually stores between 10.000 and 13.000 gallons of waste before reaching maximum capacity.

When the toilets are erected, a hole is dug into the ground in order to place the sewage vault. It is buried there and covered with concrete, metal, or in some cases, stone for stability.

While they can be placed on flat ground, the best location for a vault toilet is on a slope or a hill due to the laws of gravity. That way, the vault container can be quickly and regularly emptied by the municipality’s waste services when it reaches maximum capacity. The frequency of cleaning might depend on the size of the vault container, but the standard is around two weeks.

There are a few ways to handle smells.  The toilets depend on the wind to blow the odors away from the crowd, so the vents must be on top of the booth. When there isn’t wind or the area is cloudy, a few different tricks are used to keep the vault toilets smelling fresh.

Some of them are

Direct heat over the top of the vault toilet may also help with the smell. When the roof of the toilet warms up, the hot air will rise upwards quickly along with the stench and disperse the odor. In the summer, the sun’s heat is usually enough to play this role.

Why Do We Use Vault Toilets at Campgrounds

As we said earlier, vault toilets are usually placed on camping grounds and national parks. These areas don’t have sewage lines and running water that a regular toilet needs to function properly. Vault toilets change the game as they can be placed virtually anywhere.

Furthermore, vault toilets are used for open and wild areas as they don’t require much upkeep. Regular toilets might suffer from clogs or overflows; in the worst case, the lack of water hinders them useless.

Vault toilets collect the waste in an underground vault that municipal services can easily empty with hard terrain cistern trucks. A regular truck can also be used if the crew connects a sewage hose to the vault and uses the truck pumps to remove the waste from the toilet and move it to the truck’s cistern.

How to Build a Vault Toilet

Building a vault toilet can be quite simple, but you need to have some DIY and basic power tools skills. The first step to building a vault toilet is choosing the location. As vault toilets use the force of gravity to make the waste flow, finding the proper slope before you start digging is critical. Also, ensure that the hole you plan to dig is away from a water source or in a low-lying depression, as your brand new toilet might be flooded with groundwater otherwise.

After you pick your spot, it’s time to dig the hole where you will place the vault. The hole can be manually dug, but simply renting a backhoe will be much faster, and you can get it done within an hour. The hole should be deep as you need it. If your vault is smaller, then the hole should be smaller as well.

You have a lot of options in terms of vault material and size. You can use an old stainless steel 50-gallon barrel, leftover culverts, plastic barrels, and most anything that is waterproof and solid. You will also need to shore the hole up with pieces of wood and metal or, if you’re in the mood, some reinforced concrete.

Once the vault and the hole are in place, the only thing left to do is to make the cabin. Same as the vault, the possibilities are endless. The basic way is to buy some wooden planks, pallets, or large wooden profiles along with some 2x4s and follow the basic outhouse design.

If you’re in an artistic mood, you can draw a 3D model of the vault toilet and finish the construction with the help of some builders.

You can also purchase plastic sheets and connect them into a basic outhouse shape.

If you are operating on a budget with a limited range of tools, the best route is the basic outhouse design. In terms of price, a vault toilet can be erected with as little as $200 USD if you source your materials right or recycle some old materials.

The basic vault toilet can be built with a power drill, a few saws, hammers, screwdrivers, glue, nails, and a regular old toolkit that most of us have around the house.