6 Best Comics Who Use Potty Humor 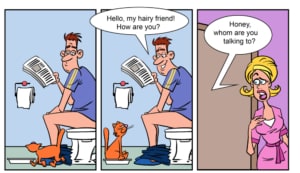 Almost every comic uses potty humor at some point to get a laugh from their audience. There’s just something about urination and defecation that makes people chuckle. Maybe that happens because it’s an activity to which we can all relate.

There are some comics (the printed kind) which use bathroom humor more often than others – and in funnier ways. If you’re not following these accounts right now with your social media profiles, then start today.

“Can I borrow your toilet paper for a minute, please?” one character asks the other. “Why, of course!” the other one says. Then the title character learns that you can use toilet paper for other needs, like blowing your nose. “It’s just like duct tape! It has a million different uses!

The father duck in this series often deals with numerous toilet issues with his children. In one example, the comic says that the “only thing worse than a kid in diapers… is a kid just out of diapers.”

“What? You need another change?” The father duck exclaims. “You were just sitting on the toilet for 45 minutes!” after the potty training work is finished.

“Hey, Adam,” says the character. “Here’s a joke I know you’ll like. What kind of poop is found in…” Then Adam interrupts. “Really! You just assume I’ll like a joke because it’s about poop!” Then Adam goes over to his buddy Jake and goes on to repeat the joke.

In another strip, there’s a grandfather who tells someone that his grandson told him a potty humor joke. “It’s kind of funny,” he says. Then he admits to what he is really doing.

“I just want to tell a potty joke and it feels kind of immature without a kid involved.”

This comic takes the time to explore the ins and outs of Japanese bathrooms for a laugh. “Ugh,” the male character says. “I gotta go to the men’s room.”

“Are you ill?” his female companion asks. “Not yet,” he replies. Then you get to see all the different ways it is possible to use the toilet.

Then there’s a sign hanging along the wall of the bathroom near the sinks. “All employees must wash hands before returning to the scene of the crime.”

There’s a tissue box sitting in what presumes to be a bathroom with a roll of toilet paper. The two are conversing.

“Yup, that’s my job,” says the tissue box to the toilet paper. “I can’t think of anything more humiliating. I’m so ashamed. By the way, what is it that you do?”

In another strip, there’s a salesperson selling toilets in a retail environment. There’s a Kindle affixed to its base. “And this model comes with hundreds of books to download!’

As a special mention here, visit cartoonstock.com and search for “potty humor.” You’ll find plenty of excellent material for a laugh. Like two rolls of toilet paper discussing their day. “Did your kid enjoy his swimming lesson?” the first roll asks.

“He was flushed with excitement!” says the second one.

What are your favorite comics which use potty humor frequently? And for more potty humor check out our high and low brow jokes here.