When Was The Toilet Invented

The toilet, is one of humanity’s most important inventions. To think back on things, just 100 years ago, many people had to leave their bed and walk out to their outhouse to relieve themselves come rain or shine. Having an indoor toilet was unheard of until the industrial revolution kicked in. People of stature made up for this by using chamber pots which were metal buckets that could be used for relieving oneself on a cold night, or commodes that were toilet seats with a bucket underneath.

It’s not very clear who actually invented the first toilet as there are references throughout history about pioneers that didn’t agree with their peers on topics related to our fine subject. There are archeological sites around the world that reveal how things actually started.

For example, in India, there are nearly 4000-year-old drainage systems that might have been used for toilets. Other examples might be the ancient Scots, who had a system for waste disposal in 3000 BC, and the Greeks, with their palace of Knossos in 1700 BC, had public pans connected to a flushable water supply. In other words, the sea. 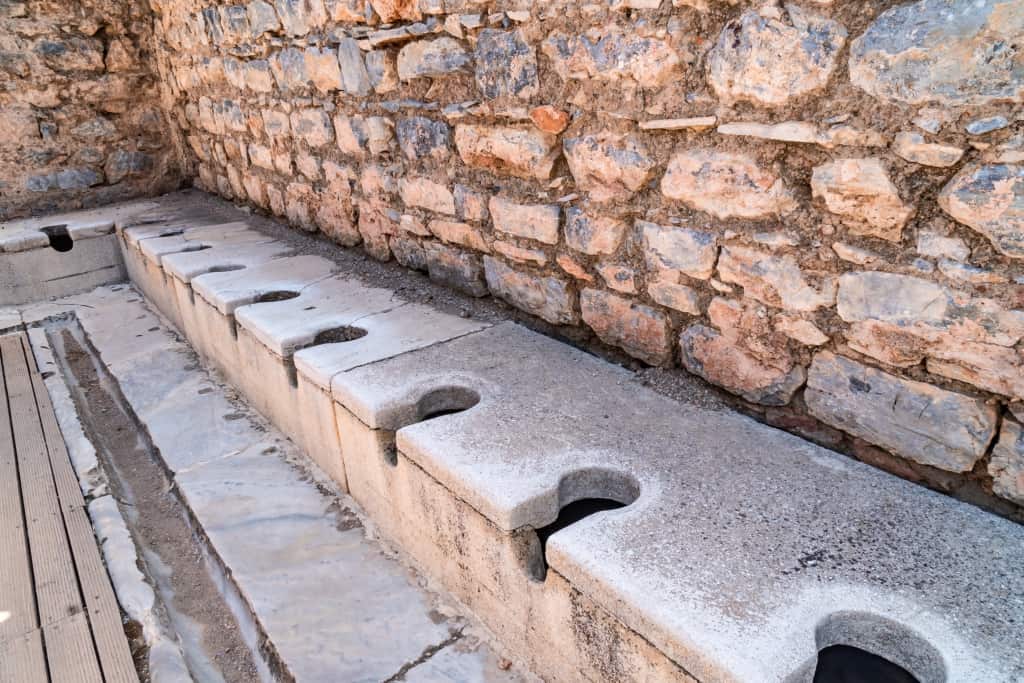 In the prime of the Roman Empire (31 BC – 476 AD), Roman residents had the luxury of relieving themselves in public toilets. Rome was famous for many things, but one of the lesser-known inventions was its public toilet systems. By the year 315 AD, Rome had more than 144 public toilets.

These toilets looked like benches with holes in them, and the Romans used them to relieve themselves but also as social hubs. There, they could meet with friends, talk about different topics, and even use a communal toilet sponge brush that was located next to the toilet.

The sponge brush was then “cleaned” in a water channel that ran through the middle of the public toilet and was placed neatly back on the toilet seat. The waste from these toilets went underground because they were smart enough to design sewer systems, and the excess waste was discarded in the upriver section of the nearest body of water. “Pardon mi dominus, you need to rinse thoud sponge ante placing it back oin thoud bench, don’t be autem animali”

This is where the history of the toilet gets a bit dark. Medieval Europe (500 – 1400AD) was kind of a nasty place, and toilets were seldom used. The hygiene lessons from the Roman and Greek forefathers were lost in the fall of the empire. In Medieval Europe, people used potties or chamber pots to relieve themselves, and the contents of said pots were discarded in the street. Plague much?

The nobility in those days was a bit more refined as they built garderobes which were protruding rooms on the edge of the house with holes on the bottom. The waste still ended up under the garderobe but at least it wasn’t on the street. Serfs, peasants, and other low-class subjects also used public relieving areas, but the main issue was the disposal of the waste.

One of the largest public toilets was constructed in London near the end of the middle ages in the 15th century. And yet again, waste was an issue as it was disposed of in the river Thames, resulting in stench and widespread disease for the whole population. In 900 years, not a single soul was found to create a solution for waste. “Prithee sir, I’ll kindly asketh ye to not alloweth thy excrement to splash on me front p’rch” 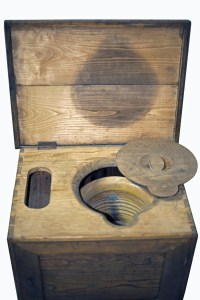 As the dark-ages were passing Europe, chamber pots and garderobes were gradually replaced with commodes. Only for the nobility in those days but still an improvement. These commodes are similar to the toilets we have today as they look like a fancy bench with a lid on top. The excrement was caught in a pot inside the commode, and the servants would later throw it out in the streets.

Some of the most famous commodes belonged to Marie Antoinette and Louis XI. Things didn’t get much better in terms of personal toilets during the renaissance but at least they had better waste management tools. Nothing tops the middle-aged in terms of waste-related diseases and plagues.

Once the renaissance was well into its apex, the first flushable toilet appeared on a sketch drawn by Sir John Harrington in 1596. Sir John was an English courtier as well as the godson of Queen Elizabeth I. The device he drew up required the toilet owner to have a 2-foot deep bowl, slightly similar to the commodes they had in those days, that would have to be waterproofed by using resin, wax, and pitch.

The device would be fed with water from an exterior cistern or a water tank where it could collect rainwater or be manually filled with water. To flush the device would require at least 7.5 gallons of water or 25 liters of water. This would be a tremendous amount of water in those days, but still, you could flush! To make up for the water requirement, Sir John stated that the toilet could be used by at least 20 people before it would have to be flushed or a whole family for a single day. Gross.

Sir John marketed his device on a comedic pamphlet, which was very fashionable those days under the slogan “A new discourse on a stale subject”. A prototype of the device was built and installed in Queen Elizabeth’s residence of Richmond palace though the toilet trend wouldn’t catch up until a few centuries later.

Fun fact trivia: Did you know that King Louis XIV of France had a commode built into his throne? The French heads of state were a bit bizarre in those days. King Louis XIV preferred to take his meals in private while relieving himself on his toilet throne in front of an entire court audience. One could say his excrement was noble but disgusting in any case. Of course, both of these toilets had no place where the excrement would end up so in Queen Elizabeth’s case it ended up on the streets while Louis’ servants had to replace the bucket underneath the throne.

The 19th century brought a whole new way of life in the form of the Industrial Revolution. Before the 19th century, the population was always culled by strange diseases, plagues, and overall low quality of life, but in the 1800s life expectancy grew and the increase in population had to be matched with working toilets. In the first half of the 19th century, major cities like London and Manchester grew to be rather overpopulated to the extent that over 100 people shared a toilet. This led to an overflow of sewage on the streets and resulted in the Great Stink of London Town.

The excess sewage quickly found its way into the drinking water supply, which had turned brown and smelly by that point. Thousands of Englishmen died due to water-borne diseases, especially during the two cholera outbreaks in the 1830s and 1850s.

It was only in 1848 that the authorities adopted a law that stated that every newly built house must have a water closet (WC as we know it) or an ash pit lavatory. There were special workers called Night Soil Men whose sole task was to empty the sewage from households and transport them upriver.

While this worked for some time, it turned sour just a few years later, which prompted the creation of the London sewer system. A sweltering summer in 1858 brought the smell and a bulk of the rotting sewage back to the streets of London. Actions had to be soon taken, and the result was the construction of the London sewer system by 1865. The sewers were connected across London, resulting in far fewer deaths due to cholera and other water-borne diseases.

While the sewers were under construction, Thomas Crapper was hired by his majesty King Edward VIII to install his version of a toilet in the royal palace in 1861. It can be said that he is one of the founding fathers of toilets. He wasn’t the first to attempt something like this, but he had the golden ticket.

By the 1870s, most upper-class citizens could afford to be connected to the sewer grid and have toilets installed in their homes. The rest of the nation still used outhouses or ash pits, but they could simply throw their sewage down the drains that led to the sewers.

Toilets, as we know them, started to pick up after the turn of the 20th century with the introduction of flushable valves, toilet bowl water tanks, and the newly created toilet paper rolls (1902). While toilets were on the expensive side, by the 1920s, nearly every family living in a building had their own flushable toilet connected to the central sewage grid. Rural areas still relied on outhouses, and they had to dig pits to store the excrement before it could be transported by a sewage service to a distant location.

While we really cannot say who really invented the toilet, the people most credited for its design and practicality are George Jennings, Thomas Twyford, Edward Jones, and Henry Doulton. Besides Crapper, these industrial pioneers were some of the first manufacturers of toilets as we know them today.

To Flush It Down The Drain

Humans are an interesting species. We can see by the many archaeological excavations that sewage and excess excrement have always been a thorn in humanity’s side. Ancient civilizations had a good thing going, but as soon as the middle ages rolled around, people seemed to have dropped the ball.

Europe had to go through several plagues and cholera outbreaks before we could find the right way to handle sewage. We can really say that the toilet as we know it today has only been in existence just a little over a century, so we’ll let you dwell on that for a bit. Imagine how harsh life was back in those days without running water, hard isn’t it?