How Much Water Does a Toilet Use?

Have you ever wondered how much water you can save by replacing your toilet? Are you trying to find a new toilet that doesn’t cost the environment as heavily as your old one? Maybe you’re just a naturally curious person and learning about this sort of thing is just another Tuesday for you.

Regardless, we’ll tell you all about how much water is used in a toilet, as well as which type of toilets are the most water-efficient in today’s article. 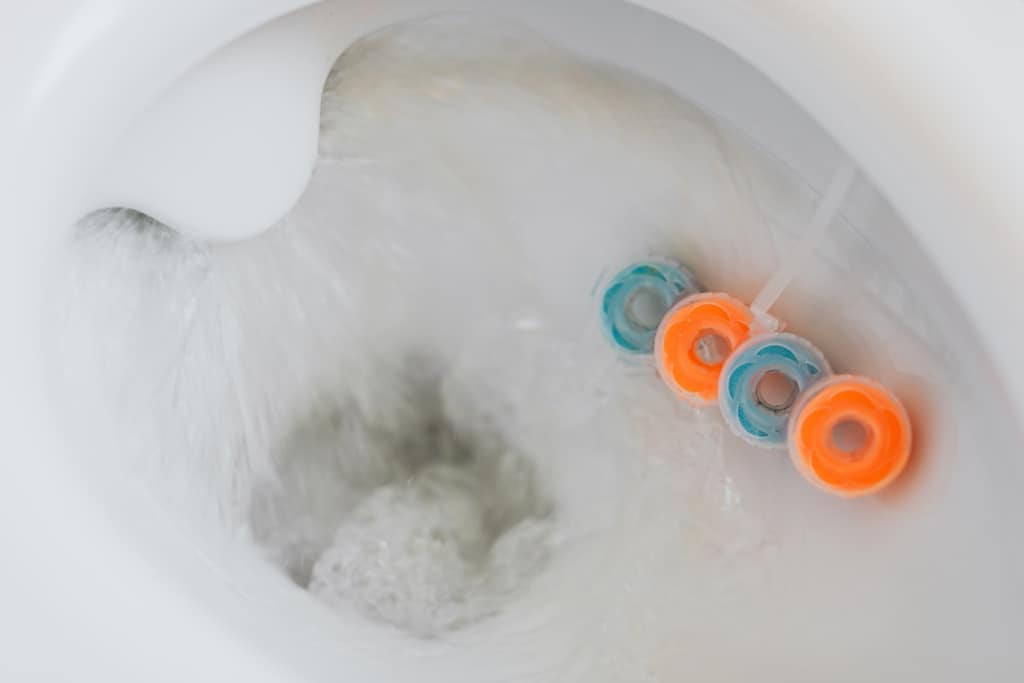 Periodic Use: How Much Water is Used Every Day?

Let’s start by saying that this is a tricky question to answer, simply because all toilets are different. How much water a toilet uses depends on its type and whether it’s a new or old model.

Even if we know what type of toilet we’re talking about, we can’t calculate how much water it uses without knowing the number of people who use it regularly.

Therefore, for the sake of answering this question, we’ll work with average numbers.

Most new toilets use around 6 liters (1.6 gallons) of water per flush.  Most people flush about five times a day and send around 30 liters of water down the drain.

The math quickly adds up. On average, a person uses 210 liters of water weekly or 840 liters monthly for their flushing needs. A household of four people can use up to around 3.360 liters monthly. Keep in mind that this is only for toilet use!

Don’t forget that these numbers are all averages. Older toilets usually use more water, but there are also newer and more efficient models that use less.

Which Types of Toilets Use Less Water?

New toilet models like dual flush and high-efficiency toilets use a lot less water and are more environmentally friendly.

Also known as low flow toilets, LFTs are equipped with upgraded flushing systems, invented to cut down on the excessive water consumption. They were developed due to the U.S government’s policies to limit energy and water expenditures.

Low flush toilets use a little less than 5 liters per flush, which is more than enough to handle the biggest of the messes.

Toilets and the flushing system are designed to use a rapid stream of water to clean out the bowl. It’s not about how much water is used, but how rapid the stream is. In fact, you don’t even need to use this much water to achieve the same result. This brings us to high-efficiency toilets (HET).

Much like the low flush toilets, high-efficiency toilets also aim to use less water, but they do so in a more efficient way.

On average, a single flush of a high-efficiency toilet uses no more than 4.8 liters, which may not seem like a big difference compared to the low flush model, but it actually saves at least a liter of water per day for each person!

If you have an older model toilet and want to save water, here’s our guide on the best water-saving, high-efficiency, and low flush toilets currently available.

The most efficient in terms of water use, dual flush toilets work a little differently than the rest. You’re probably already familiar with this, but dual flush toilets are the ones that have two buttons/tabs for flushing, usually one smaller and one larger. Here’s a great one we have recently reviewed as an example.

However, one common problem with dual flush toilets is that they are prone to leaking. A leaky toilet can cost you a lot more than you’re saving, not to mention the environmental impact, as it can waste anywhere between 215 to 400 liters a day!

If your toilet’s leaking, you can check out our guide on how to fix common problems with your toilet and fix your leaky flush all by yourself!

Water Use According to Production Date

We can also determine the amount of water a toilet uses depending on the year it was manufactured. Toilets that were manufactured before 1982 use around 22-30 liters of water per flush. Toilets that were produced after this date and before the legislative movement that happened around 1992-1994 use up about 15 liters. Thankfully, these toilets aren’t that commonly found anymore.

As we mentioned, newer models use a lot less water. However, if you’re unsure and want to check, newer toilets usually have the water usage information in liters per flush or gallons per flush (LPF, GPF) inside or on the side of the water tank.

Lastly, If you’re wondering how much water your household uses regularly, the city of Melbourne offers a household water use calculator on their website that can help you find out how your household is performing in terms of water consumption.